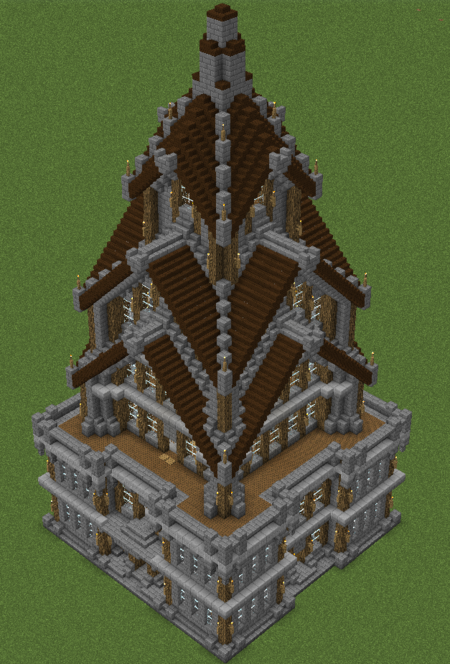 The Town Hall is a special structure in CivilizationCraft that represents your town's central government. When you found a new town, the town hall is automatically built on the location that you are standing on. The town hall can be re-positioned using the '/build town hall' command.

Since town halls are important targets during war, your town can be instantly captured during WarTime if you are caught without them, and you're not allowed to rebuild them during WarTime.

There are also Trade Good Frames inside your Town Halls and Capitol, if you bring a Trade Good token from a Trade Outpost, you will get a number of benefits from these. It is worth your time to search for trade goods that will benefit you.

The town hall will be replaced by your Capitol in your main city.

The town hall has several special abilities that make it a useful building to towns. It is the center of your Cultural borders.

The town hall plays a key part in war. First, the town hall is the spawn point for ALL town members during a war. It overrides any beds used by players. Additionally, this is the building your town must defend or destroy during a war in order to win.

Each town hall contains 6 Control Blocks(obsidian blocks). Each control block has 20 hit points. If there are destroyed (mined) by an enemy Civilization, they may capture your town see Captured Towns.